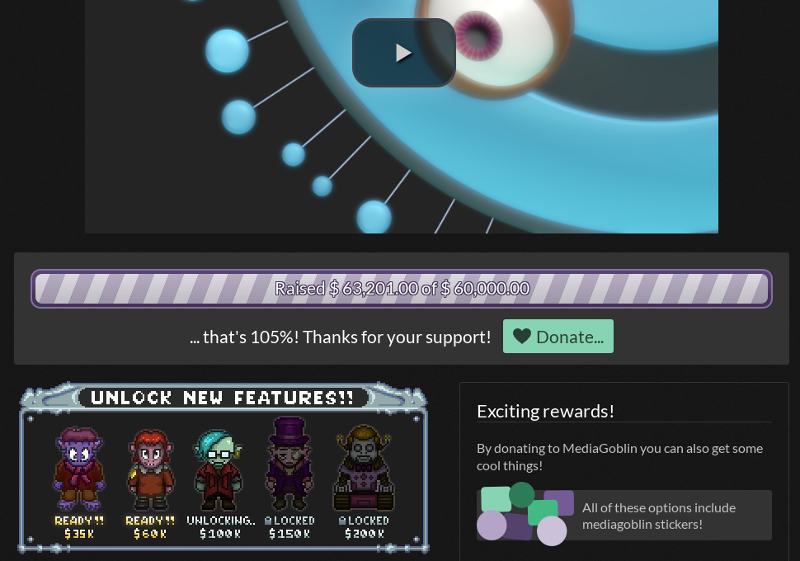 So this happened. To say "we are floored with the success of the campaign and the community support we've received" would be a huge understatement. We made the call to arms to fight for federation and privacy features on the web, and you answered.

Like an adventure movie, the stakes were high, at times we weren't sure we were going to make it, but there was excitement abound and in the end, we were victorious. We surpassed not one but two milestones and met a 10k matching grant (the final thing putting us over the top of that last one, by the way, was cashing in our Bitcoins). We gave a complete and total financial transparency breakdown, and you responded with appreciation. We came to the last week of the campaign at 67% of the way to the second milestone... still a ways to go... could we do it? And we did! Or we should say, YOU did. You made this possible.

But that's hardly the end of our adventure... the fundraising campaign is over, but the most the most exciting times are ahead of us. Let's look at just what you all have succeeded in unlocking here: 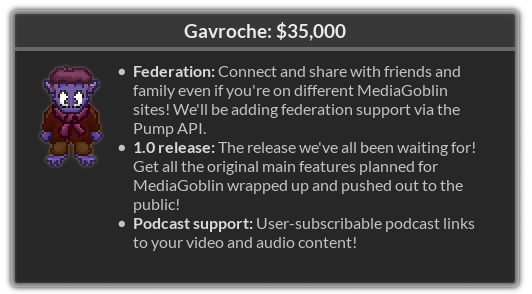 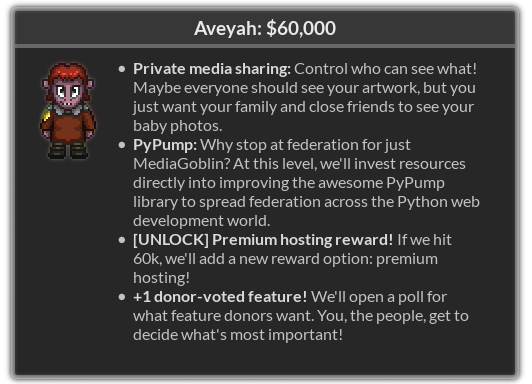 Wow, feature-wise that is a lot of stuff! From federation, to private media sharing, to PyPump development, to podcast support... that's a lot of features alone. And I'm sure we're all excited about the 1.0 release ahead! You've funded all of this, which means we are getting to work on it. We'll be sure to be making updates as we move forward with implementing it all.

There are more exciting updates on the way, also. Two of the things unlocked we'll be making more announcements over the next couple of weeks, but we are preparing for them to make sure we can pull them off in a way that's best for everyone. The first of these is the "donor chosen feature". We're going to give donors a list of significant features to choose from, but we want to make sure we have a list of things that's both feasible and interesting to pull off.

The second is the premium hosting reward. This got unlocked as a reward option just barely a day before the campaign ended. We thought it would be pretty crazy (and unfair) to offer this option right before the end of the campaign and then only give people a few hours to select them, so here's what we're doing instead: the main rewards from the campaign are now closed down (you can still donate if you like), but very shortly we're going to open things up again, but with only premium hosting as an option. We think this is the best route for everyone: it will allow us to properly plan out the reward in a way that works well, and it will give people a chance to actually opt in to the reward.

So, that's plenty to keep looking forward to! Keep your eyes here for more updates on the above!

Last of all, what about all the rewards you all ordered? The plan is that we will begin delivering on those over the summer in order to maximize reward delivery with actual project productivity. My spouse Morgan Lemmer-Webber will (very kindly) be assisting with reward fulfillment over the summer, in-between her research projects. We realize some of you may be eager to get your rewards, but hopefully you'll be happy to realize this means we'll be able to optimize time between getting those out and getting work done on the real stuff you funded: MediaGoblin itself!

So, that's a lot to look forward to. We hope you're as excited as we are as we step into this new era of MediaGoblin development. And there are surely more exciting things to announce along the way.

In the meanwhile, it's worth repeating: thank you to everyone who supported the campaign. We're tackling some ambitious stuff here in MediaGoblin-land with the end-goal being nothing short of paving the way for a better internet. Thanks for helping us make that possible, and joining us on this journey. We couldn't do it without you.