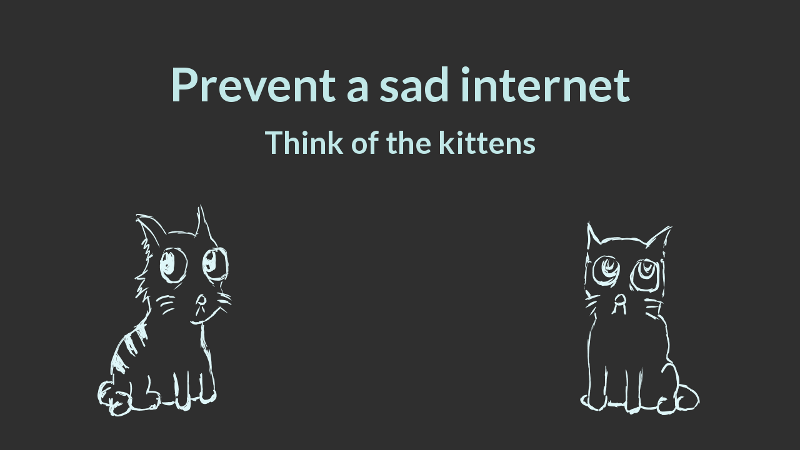 In the video we made for the MediaGoblin campaign, there's a part of the video which says: "What would happen if YouTube went away? What would happen to cat videos on the internet? It would be like a cat massacre." People seem to really respond to this part of the video, which is good (though they usually ask me how we resisted the pun "cat-astrophe"... I guess with the title of this blogpost, we finally gave in). And every now and then we get a reminder that this isn't just a vague possibility: these things can... and do... really happen.

Today, for a few minutes, YouTube went down. For a brief moment in time, millions of cat voices cried out in terror and were suddenly silenced. Now, granted, they came back a few minutes later. But within the same short interval that I heard about YouTube going down, various programmer friends of mine started complaining that they couldn't get any work done because GitHub also went down due to a DDOS attack.

Is this because YouTube or GitHub are badly run, or that the companies that run them are inherently evil? No, I don't think so. But there is a structural problem, one that's the case with any major centralized service: when that service goes out, it takes everything it hosts out with it. This is a reminder that these types of institutions, even when run by brilliant and wonderful people, have inherent flaws as they become large, centralized behemoths. Even the nicest, most well run of centralized behemoths can fall. And will.

And as we point out on the campaign page, it's entirely possible that your favorite large, centralized service could go away permanently. In fact, some day it probably will. Geocities might have seemed like a joke to everyone by the time it disappeared, but in 2000 it seemed like a huge institution that would never go away... but then it did. Maybe some day YouTube or Flickr will cease to be profitable, and then those will go away. It could happen... it nearly happened to Google Video.

What's the cure? Bring the web back to be a decentralized place, the way it was intended to be. This isn't an easy task, though: services are getting larger and more complicated, and need a lot of special expertise to get them working properly. The good news: we are already working toward that future. Could you help us out?

Thanks for all you do,
-- The MediaGoblin team