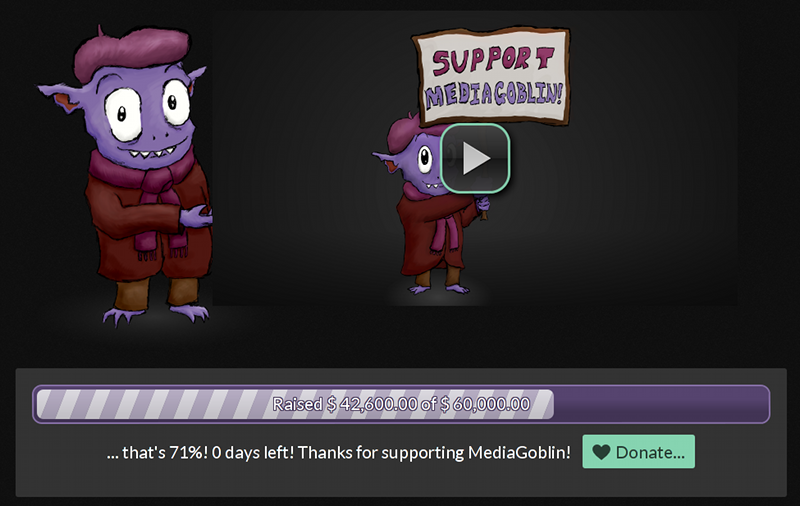 Well the campaign is over.... and before anything else, I think we should take a moment to say: We did it! The campaign was a success! Thank you EVERYONE who supported the campaign! YOU ROCK!

Our goal, technically, was 60k, but we weren't running an all-or-nothing campaign, so we decided to set our goal higher than our "bare minimum". In several meetings with Deb and Will, I remember saying, "well, if we hit 40k, I think I'm going to feel really good about things." And we didn't just hit 40k... we got a bit above it, beyond 42k even (which, as I said in a previous blogpost, has nerd-significance in showing our place in the grander scheme of life, the universe, and everything)!

So you are probably wondering! What exactly did you all finance? How can you expect this set of money to be used? Well, let me tell you! Basically: you have bought a year (plus a couple bonus months, actually) of me working on MediaGoblin fulltime! I take this very seriously... more on how I think that will pan out... but first let's have a breakdown of how we got to that.

We weren't sure originally how much money it was likely that we were going to be able to raise. This is one reason why we both shot higher than the bare minimum, but also why the video said "hire our talented developers and designers" while the actual campaign page said "hire Chris Webber, and if we get more, pay for even more people to do work". Basically, it was really hard to tell before the campaign launched how much money would come in. Would it be 15k? Would it be 150k? We didn't really know. If we raised enough, it would be great to pay for multiple people to work on things. We estimated about a 25% overhead... 10% on the FSF handling the fundraising infrastructure and finance stuff (which is less than this has actually cost them) and about 15% on fulfilling rewards and a few other costs. So 60k was the estimated cost to pay me for a full year... which would mean 45k after everything else. That's a smallish salary for a programmer (especially without benefits in the US, and especially with my spouse in graduate school), but livable, and we budgeted that as possible. So when Deb, Will, and I discussed what we would shoot for as a reasonable goal, we thought 60k would cover things for me to lead the project fulltime for a year. But would we hit above that or below that? We didn't really know.

Of course, we actually didn't hit 60k, and I'm still saying that I'm going to work a year fulltime, plus! So how does that work out?

Basically, there are one and half months left of 2012. I won't be taking any payment for that, but I will be working (hence the plus). A lot of the next month and a half will be involved with fulfilling donation rewards and et cetera regarding the campaign, as well as wrapping up a few small prior obligations. So that's the plus. So what that also means is that I will be working fulltime on MediaGoblin for a full year... and a very literal full year in multiple senses!... from start to finish of 2013. (To make up the difference since this does not cover my full expenses I will be doing some contracting for a little bit on weekends.)

I consider this to be a real job with real duties, so to that end, I'll be providing biweekly updates once the "full year" starts in 2013. I haven't figured out where yet, whether or not it'll be here or on the mailing list or to the donors list or on the wiki or on my personal blog, but I'll be making updates somewhere. You financed this... you deserve to be kept in the loop!

And there's quite a lot to do. We've laid out a roadmap to 1.0, and it's quite a tall order. By completing this fundraiser it isn't the case that we now no longer need volunteer and community development... we actually need that now more than ever! (One of the reasons I left my job to focus on MediaGoblin fulltime was because we have a strong community, but it wasn't getting the level of attention it deserved!) Whether or not you want to help code, do graphic design, write docs, do testing, or something else... we could really use your help! So please do join us!

Thank you all! Thanks to you, 2013 really will be the year of MediaGoblin development! I know I am looking forward to it!