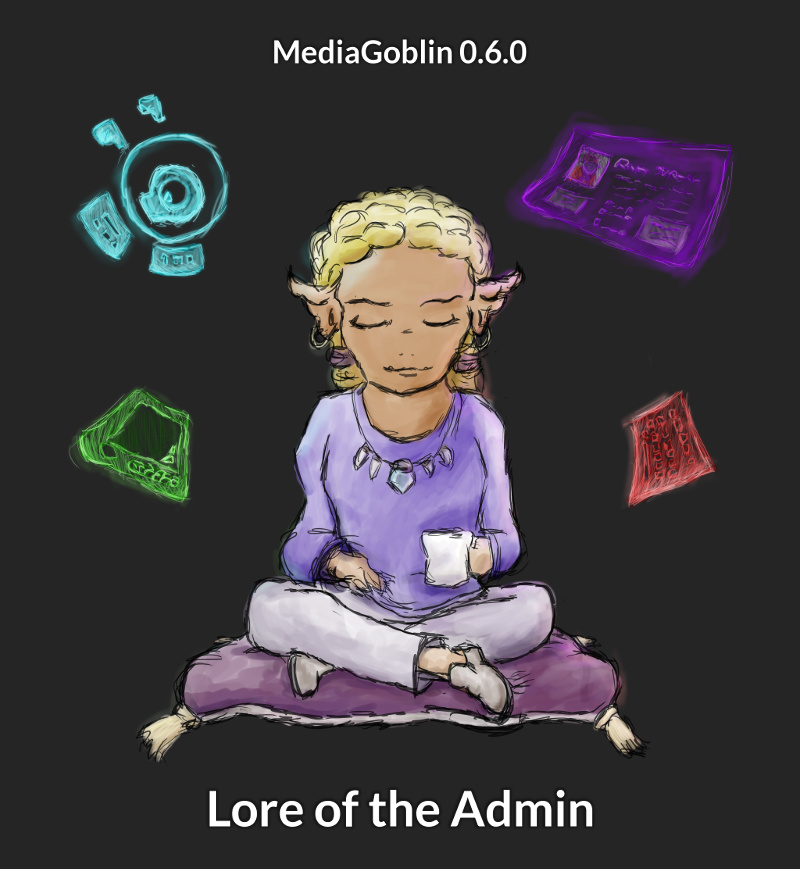 A system administrator reflecting on her work, surrounded by various goblin-computer-interfaces.

Welcome to MediaGoblin 0.6.0, Lore of the Admin! This release has a lot of cool stuff in it, but we've especially added plenty of tools to make things better for site administrators and moderators. (And sites that are easier to administrate are better for everyone!) 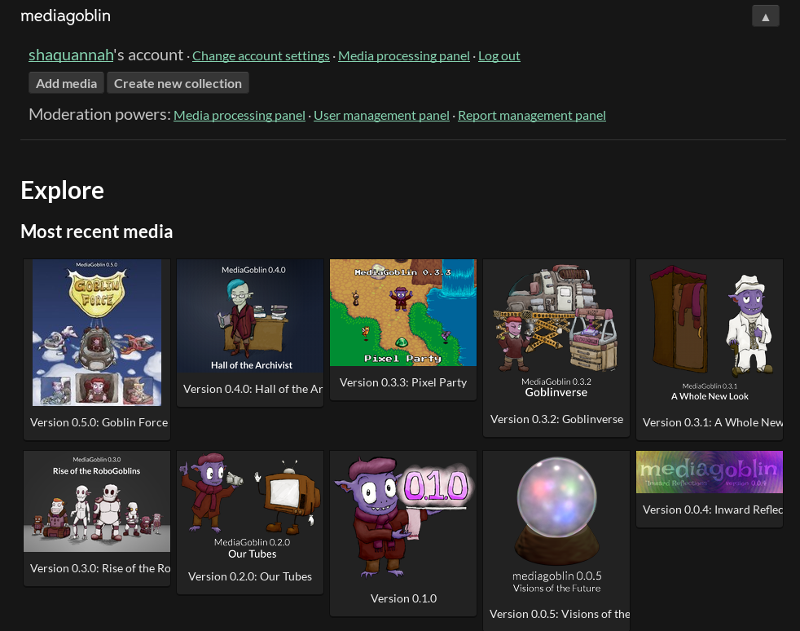 Site administrators and moderators have a whole new set of features they can make use of. Assuming you have the right user privileges, you can see these tools from the top dropdown menu. 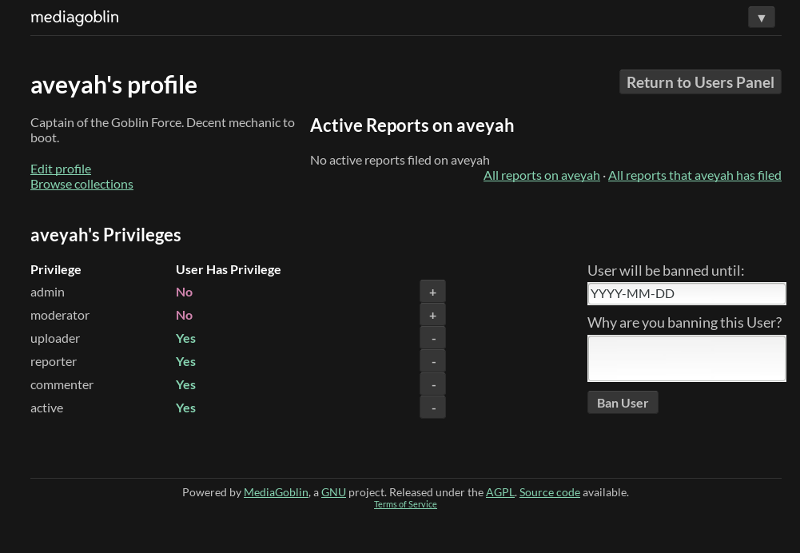 You can see here one of the new administrative tools that are built in, a user administration panel. From here a moderator or administrator can take various actions, such as modifying a user's privileges. We've also built in new tooling so that site administrators running more public instances can properly moderate problematic content or even ban problematic users. 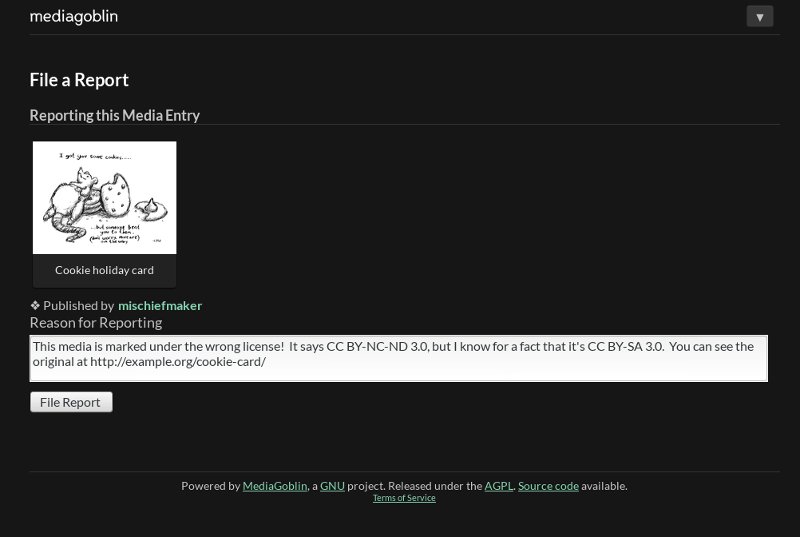 Speaking of which, it's now possible to submit reports on media which is problematic... 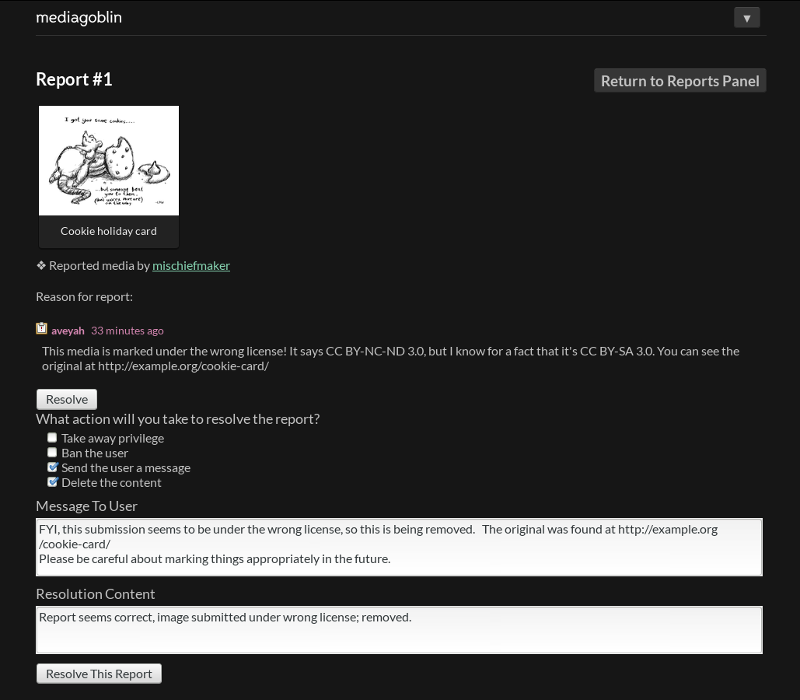 ... administrators can then view and resolve such reports appropriately.

Your users might also not know what's acceptable and what isn't on your MediaGoblin instance, and of course you want to let them know! As such we've included a default terms of service (which can be disabled or changed as needed) based on the Wordpress Terms of Service.

We've got some other nice features in this release too. It's now possible to set upload limits per user or per uploaded file. We've also upgraded our version of video.js that ships with MediaGoblin. And more! Check out the release notes to get the full scoop!

That's it for this release, but stay tuned... as always we're working hard! (Can you believe this is our fifth major release since last year's campaign ended? Wow!) We hope to make some more exciting announcements shortly! And if you're thinking about getting involved in the MediaGoblin community, please do join us in trying to make the Internet a better place! Happy goblin'ing, everyone!

Update: We also just pushed out a smallish followup release, v0.6.1. This release is very minor, it just fixes a couple of things with the default terms of service and makes it off by default so we can get a chance to give it more community review. Otherwise, it's mostly the same release. Happy admin'ing!