Welcome to MediaGoblin 0.2.1: Gearing Up! This release has largely been about paving the way forward for MediaGoblin's future and restructuring under the hood. Nonetheless, a good number of awesome features got implemented for this release.

We've brought some old-school awesomeness with ASCII art support to go along with our video support (which you may remember we were pretty jazzed about adding in our last release). You have to specifically enable it, so see this documentation for details. In the future, you can expect to see support for all sorts of media types, including 3d models, slides, and presentations! 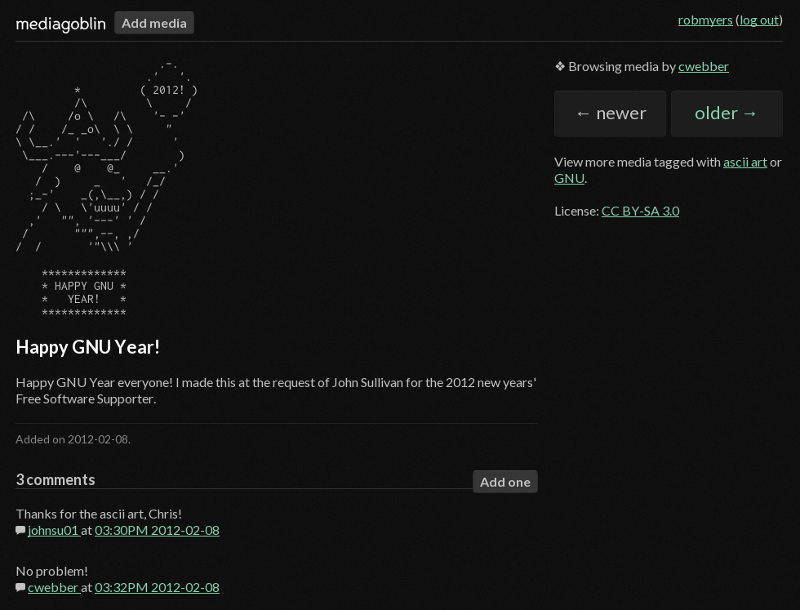 There are plenty of nice UI tweaks, including nice, tidy-looking comment areas. You can now easily apply Creative Commons licenses to your MediaGoblin media.

We're now able to provide a customizable EXIF metadata display. EXIF data means all the little tags that modern media recording devices include inside your image files. If your camera records it, you can display it: location, camera manufacturer, what the camera model was, the focal length, etc. If you took a sideways picture (and your camera is fancy enough to detect it) then MediaGoblin will rotate your image in the right direction for you. The default setting is hidden (but not scraped) metadata. Since this is MediaGoblin, it's easily customized for your instance -- just turn on exif_visible option in mediagoblin.ini.

GPS support is working! Does your camera have a GPS in it? Then you can haz maps. We worked hard to build compatibility with another great FLOSS project, OpenStreetMap. Again, this feature is off by default. You can enable option geolocation_map_visible in your mediagoblin.ini to show GPS info.

What about "under the hood" news? If MediaGoblin were a car we were building from scratch, then we recently decided to replace the engine. After significant discussion, we decided to switch from MongoDB to SQL using the python SQLAlchemy library. The SQL code is actually already very close to full deployment in the main repository and many parts have already performed well in tests. Huge props are due to Elrond who has made herculean efforts towards the Great Database Migration of 2012. The transition is already well on its way!

We're smoothing the way for federation. We're kicking off Kuneco (which means "togetherness" in Esperanto) is the collection of libraries we're building so that OStatus, the software that drives our inspiring forebears at StatusNet/identi.ca, will play nicely with python webapps. We also implemented PubSubHubbub (push) support in this release. We can now "push" notifications of our feeds out to the PubSubHubbub servers. One small step towards federation, in a series of many steps that will one day add up to a large step. More on this soon!

MediaGoblin is coming soon to a device near you! We want your phones, desktop applications and tablets to be able to submit media. We're putting together an API that will allow programmers to hook their applications into MediaGoblin. One day we'll be part of a massive decentralized ether and having a great API for interoperability is one way we start to get there.

So much amazing work happened to make this release possible! We could not have done without all of our amazing people. People worked over the holidays. Their paid jobs said, "Hey take a break this month." and our contributors took that time off and gifted it to the 0.2.1 release. Thanks so much to: Aleksej Serdjukov, Aaron Williamson, Christopher Allan Webber, Deb Nicholson, Elrond of Samba TNG, Jef van Schendel, Joar Wandborg, Karen Rustad, Michele Azzolari, Will Kahn-Greene! (If we missed you, let us know so we can correct the post!)

Get on board! MediaGoblin is actively seeking testers, translators, coders, and bug filers. We'll save you a seat as we set out on on the road to federation!